As 2021 Club Members, Dafferns have been behind the 2021 bid from the very start. UK City of Culture 2021 will bring huge economic and cultural benefit to Coventry and the whole Coventry and Warwickshire region

Laura McMillan, Manager of the Coventry City of Culture Trust:

“It’s been a bid by and for the people of Coventry. It has brought so many people and organisations together and this is just the start. Over the next three years we will ensure that everyone in the city, which has been moving people by cycle car and jet engine, is now moving people through culture.”

Coventry’s 2021 programme will include a Street of Culture programme co-producing work in local communities. T 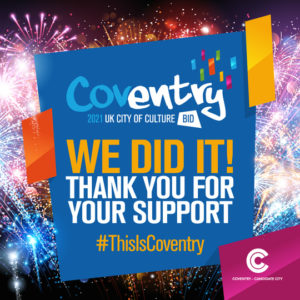 As one of Coventry’s oldest firms of accountants, we feel passionate about promoting business opportunities within Coventry and Warwickshire. Dafferns was founded in Coventry in 1896 and has seen the city develop through industrialisation, recover from the devastation of the Blitz and flourish once again into an internationally recognised centre for manufacturing, service industries, education and culture.

That’s why the Coventry 2021 UK City of Culture Bid had our full support, urging other firms in the region to join us and we are thrilled we have won!